Tappan Adney earned his living for many years in New York City as a writer, artist and photographer, working for outdoor-adventure magazines.

Harper’s Weekly, the most popular news magazine of its day, hired Adney to cover the Klondike Gold Rush of 1897-98. He spent 16 months there enduring sub-zero temperatures and a brush with death from illness. His dispatches and photos for Harper’s became the basis for his book, The Klondike Stampede, published in 1900 and was described by popular Canadian author Pierre Berton as “the most valuable work on the subject,” written by someone who was actually there.

Between 1890 and 1906 Adney lived in New York City, working as a freelance writer and illustrator for outdoor-adventure magazines. His work was published in Harper’s Weekly, Collier’s Weekly, Harper’s Young People, Saint Nicholas, Outing, and Our Animal Friends. 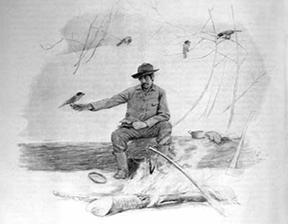