Tappan Adney is widely credited with saving the birch bark canoe from oblivion. Today he is best known for his canoe book and its companion collection of 110 one-fifth scale model bark canoes, documenting all major tribal types in North America and worldwide. His model canoes and precise miniatures of other Native artifacts are in museums in both Canada and the United States.

Author Edwin Tappan Adney devoted his life to studying canoes and was practically the sole scholar in his field. His papers and research have been assembled by a curator at the Smithsonian Institution, and illustrated with black-and-white line drawings, diagrams, and photos.

In 1938 Adney was visited by two representatives of The Mariners’ Museum of Newport News, Virginia. The museum was only five years old at the time and was actively looking for acquisitions to add to its collection. They offered to buy Adney’s model collection, which they had seen at the Strathcona Museum in Montreal. They also offered to pay off his loan to the Strathcona and to pay him a monthly stipend until he finished his book, which they offered to publish.

Adney accepted the offer. His models became the property of The Mariners’ Museum in February, 1940. Adney worked intermittently on his canoe book. He was regularly distracted by his efforts to help his Native friends with issues of land dispossession and treaty rights.

The Mariners’ Museum stopped paying Adney a monthly stipend in 1947 when they discovered that he had not worked on the book for more than a year. Once again Adney found himself in conflict with museum management. He maintained that the book was his and museum managers had no right to tell him when he should work on it. The museum saw their monthly checks to Adney as down payments on the book. There was no written contract, only a verbal agreement open to interpretation by both sides.

Adney died in October, 1950, leaving his canoe book unfinished. It was published posthumously by the Smithsonian Institution in 1964 with the help of The Mariners’ Museum and editor and co-author Howard I. Chapelle. 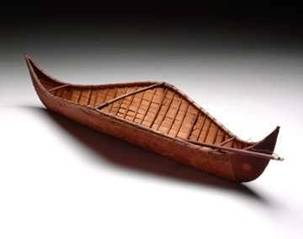